The Redeemer of Israel

Jesus was a Jew. The New Testament begins with the genealogy of Jesus, starting with Abraham, Isaac and Jacob, and then follows the line of the tribe of Judah through to King David.

Jesus’ name in Hebrew is Yeshua, which means ‘He will save’. His name was translated into the Greek of the time as Iesous [Matthew 1:21] and that later translated into English as Jesus.

She will bear a Son; and you shall call His name Jesus, for He will save His people from their sins.

Jesus is the promised Messiah. The promise of a Messiah, or Mashiach in Hebrew, an anointed Saviour from God, was made first to the Jews and is recorded in the Torah. The Greek word for Messiah is Christos which was translated into English as the Christ. It was not the family name of Jesus of Nazareth. It is a title.

The Redeemer promised by God is Yeshua haMashiach – Jesus the Messiah, or Jesus the Christ. He was a Jew – circumcised on the eighth day, of the tribe of Judah. He observed the Law of Moses perfectly throughout His life.

Jesus died at the Jewish feast of Passover – a perfect Lamb – sacrificed to purchase our redemption, the forgiveness of sins.

His disciples were Jews. Among them were Shimon, called Petros in Greek, and known to us as Simon Peter. Also Yakov, translated Iakobos in Greek and then, strangely, to James in English. Also, Yochanan, or Ioannes in Greek, now known, in English, as John.

One of the apostles, or emissaries of the Messiah, was Shaul of Tarsus, a Pharisee trained under Gamaliel. His name, in Greek, was Paulos. The Bible calls him Saul, and also as Paul, in English. He was a Jew.

Jesus died at the Jewish feast of Passover – not at Easter – a perfect Lamb, a sacrifice of atonement, fulfilling the types and shadows in the Law of Moses. He died to purchase our redemption, the forgiveness of sins.

The first to believe in Him were Jews. For several years the church comprised only Jews. When gentiles came to place their faith in the Jewish Messiah, the Jewish church was astonished. Many were reluctant to accept that God would have a place for non-Jews in the world to come.

However, Isaiah had said that God would bring salvation to the gentiles through the Messiah.

And now the Lord says – He who formed Me in the womb to be His servant to bring Jacob back to Him and gather Israel to Himself, for I am honoured in the eyes of the Lord and My God has been My strength – He says: ’It is too small a thing for You to be My servant to restore the tribes of Jacob and bring back those of Israel I have kept.
I will also make You a light for the gentiles, that You may bring My salvation to the ends of the earth.”
~ Isaiah 49:5-6 ~

Jesus said that He was the only way to the Father. He preached to Jews. The first to put their trust in Him were Jews. They witnessed to Jews. Gentiles, who came later to the faith, have been grafted into a Jewish tree.

There have always been Jews who believe in Jesus.

Perhaps Marc Chagall did too. Chagall was a Jewish and Israeli hero. His artworks decorate the Opera House in Paris, murals at the New York Metropolitan Opera, a glass window at the United Nations, twelve stained-glass windows at Hadassah Hospital and wall decorations at the Knesset in Jerusalem. He is one of the few artists to have exhibited work at the Louvre in Paris during their lifetime. 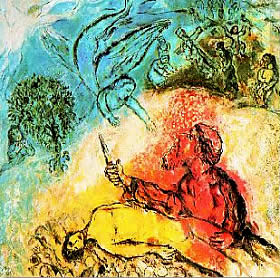 Look at this painting by Chagall. It is Abraham and the sacrifice of Isaac. A more Jewish subject would be difficult to imagine. It is straight out of the Torah, except ...

... the angel comes to stay Abraham’s hand. Sacrificial blood is flowing over the patriarch. The blood is coming from Jesus, carrying the cross, while people bow in worship.

If, as a Jew, you are looking for answers, I recommend that you read Michael Brown’s books. Michael Brown is a Jewish believer in Jesus. He has a PhD in Near Eastern Languages and Literature from New York University. He has written many books and is a contributor to the Oxford Dictionary of Jewish Religion.

Although I am not associated with Dr Brown, I recommend:

(These books are available online from Dr Brown’s website).

Many Jews have placed their faith in Jesus. They have chosen to believe, in spite of opposition, because of one simple fact – the message is the truth.

Dr Charles Lee Feinberg, ThM, ThD, PhD, of La Mirada, California, is a Hebrew Christian. He was Professor of Semitics and Old Testament at two theological seminaries – Dallas and Talbot.

He has written many books, including:

In the study of Zechariah he wrote a commentary on the coming of Israel’s ultimate Day of Atonement. It will be an hour of penitent sorrow, followed by rejoicing.

Professor Feinberg took the Bible verses from Isaiah 52:13 to 53:12, which are among the many in the Tanach that point to the Messiah, and he paraphrased them as follows:

Which ones of us believed the report made to us? To which ones of us did the mighty power of God disclose itself? So few of us, because He appeared so lacking in promise: He had no outward attraction that our carnal hearts could then delight in. So we desired Him not, with the result that He was despised and cut off from our company, knowing only griefs and pains, as we went our way, turning our gaze from Him.

But, marvel of it all, He was bearing and enduring our sorrows and our griefs, and all the while we thought He was being stricken, smitten of God, and afflicted because He was so sinful, and we were so good.

No. He was smitten because we were so sinful, for He was wounded because we had transgressed the Law and will of God: He was crushed to death because of our iniquitous ways; the scourge of God was upon Him, so that we might have spiritual healing and peace with God.

We all went senselessly on in our sins, deliberately and wilfully, and God caused to come upon Him, as an avalanche, the sins of us all.

What oppressions and merciless treatment He suffered, yet He endured them so patiently and submissively. And yet we did not lay it to heart, that He was suffering all this because it was due us.”

Be assured of your place in the world to come.
The key is to trust in Jesus, the Messiah. 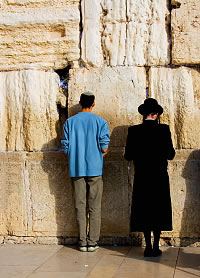 The people of Israel ... theirs is the adoption as sons; the divine glory, the covenants, the receiving of the Law, the temple worship, the promises, the patriarchs, and from them is traced the human ancestry of Christ ... (Romans 9:4-5)